Dramatic, Record-breaking and Heart-breaking. The latest flurry of late goals in ISL 2019-20 has been a roller-coaster ride for the teams and fans alike. The first 30 matches of ISL6 have seen a 26.3% rise in the number of goals scored beyond the 80th minute. ISL6 has also recorded the greatest number of consecutive draws (6) than any other ISL season. SportsKPI breaks down the late equalizing goals that led to stalemates in the previous 5 matches of ISL 2019-20.

Chennayin FC had scored 2 goals in injury time against Hyderabad FC to get their first goals in almost 800 minutes and their first win of this season. They, once more, managed to score two against Odisha FC, however, a brilliant sequence of dribbling and passing opened up a chance for Aridane Santana and he tucked away his shot into the Bottom left corner to level it up for Odisha. Here’s a breakdown of Odisha’s goal. 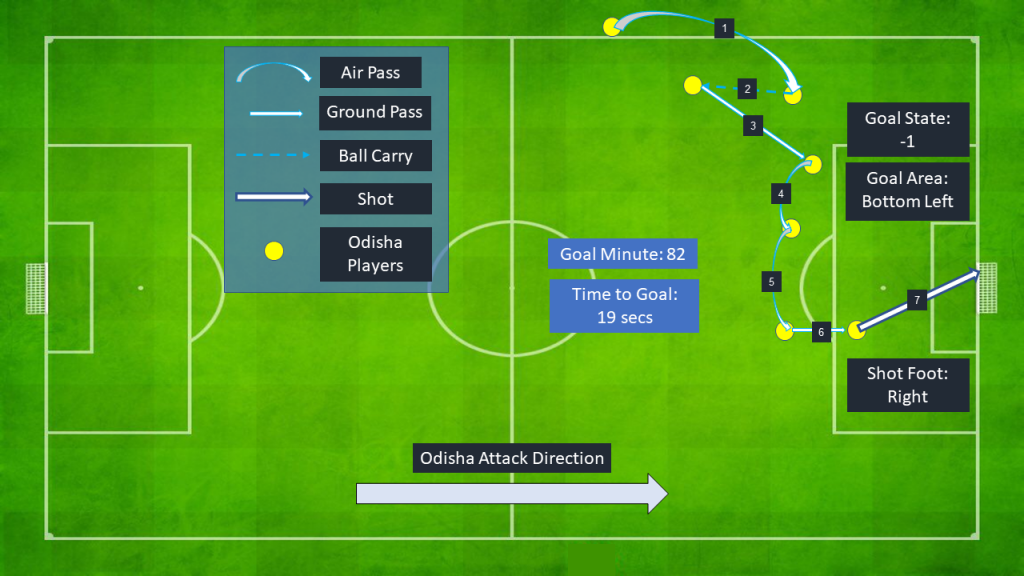 Bengaluru FC had dominated the match throughout the 90 minutes. In fact, before Hyderabad FC scored the equalizer, they had only a single shot on target. With a patient build-up, Hyderabad breached the Bengaluru back-line with a lobbed through ball and who better than the former Bengaluru man, Robin Singh to nail the ball in the back of the net. Here’s a breakdown of Hyderabad’s goal. 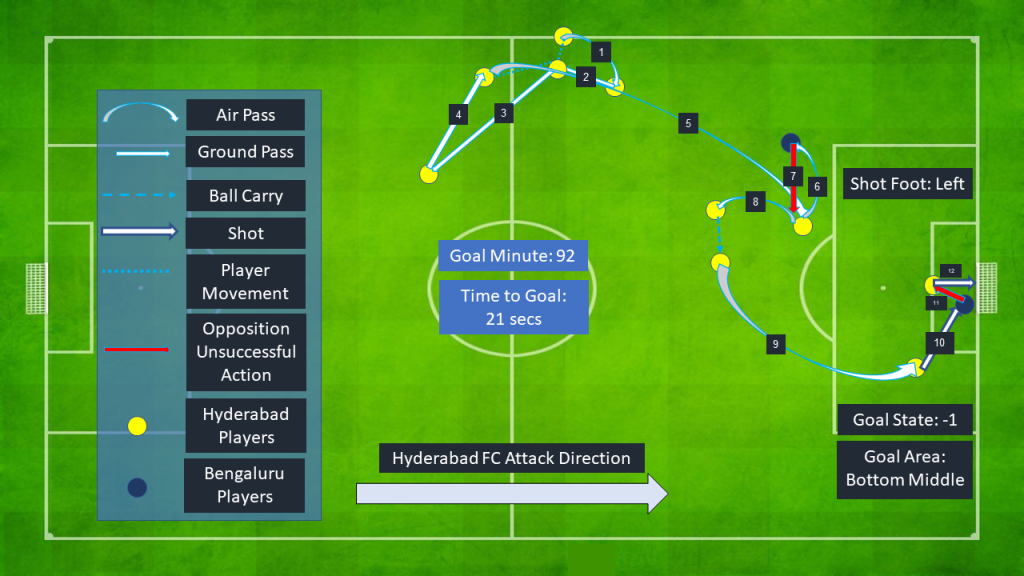 Mumbai City FC had managed to keep the ATK’s attacks at bay for almost 40 mins. After going a goal down, they managed to turn things around by taking the lead in the 93rd minute. However, as they say, it’s not over till the final whistle. A long ball in Mumbai’s box by ATK, 2 defense lapses later, the ball kindly falls for Roy Krishna at the edge of the 6-yard box. Relive the blitzkrieg ATK move for their equalizer below. 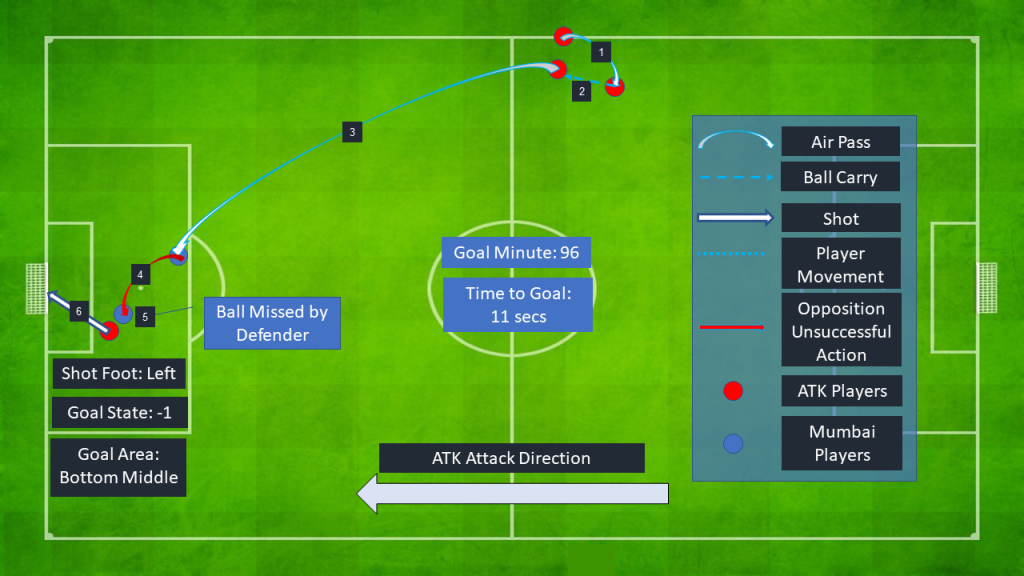 Without Coro at the helm and Jahouh suspended, Goa found it difficult to break the Kerala defense often. With time running out to level the match, Goa capitalized on a turnover in the attacking-third and put the ball in the back of the net before the Blasters could realize what hit them. Relive the turnaround of Goa’s fortunes with the data-based recreation of their goal. 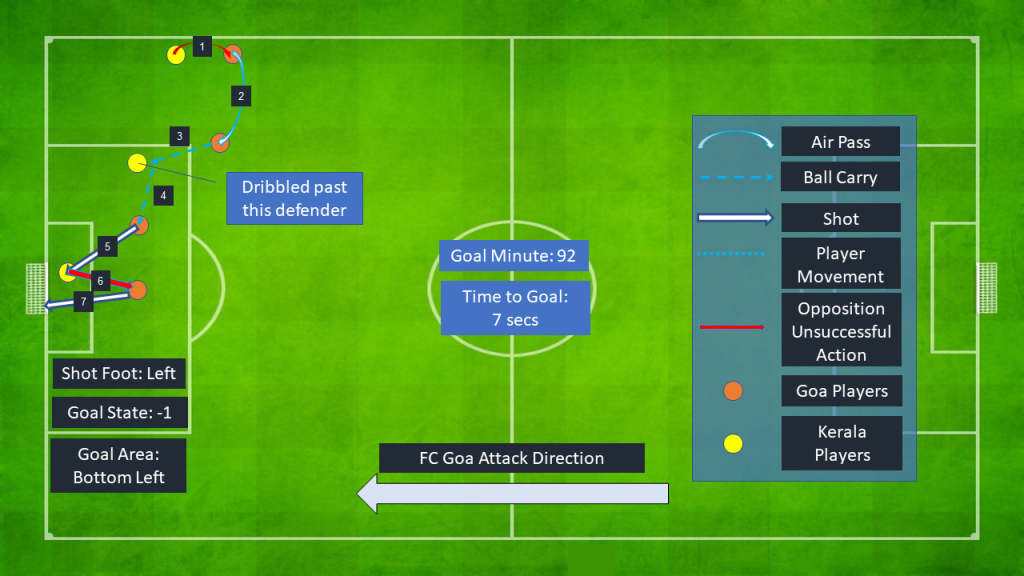 Jamshedpur were almost home and hosed with a 1-0 victory when NorthEast recovered the ball at the half-life. Two aerial passes and a deft left foot placement later, they found themselves level with only injury time left in the match. Relive the data-based flash-like aerial attack of the Highlander’s equalizing goal. 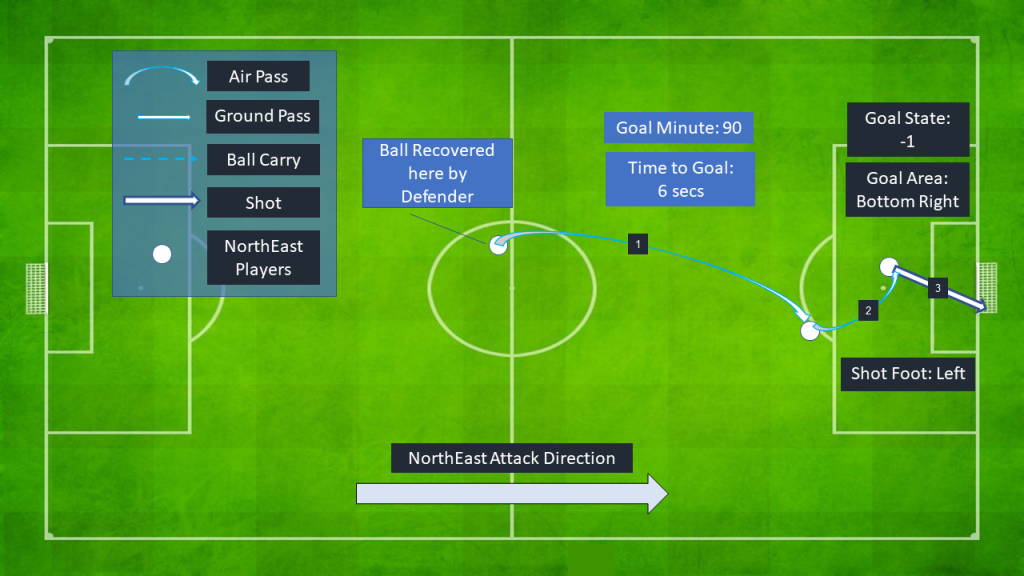 This analysis shows that ISL teams need to be wary and prepared every time the opponent has a set-piece or when there is a turnover of possession. SportsKPI is coming up with the breakdown of more patterns of play as the days go by. Stay tuned.

Insights into the Sports Industry: EP1 – What is the Job of a Football Analyst?